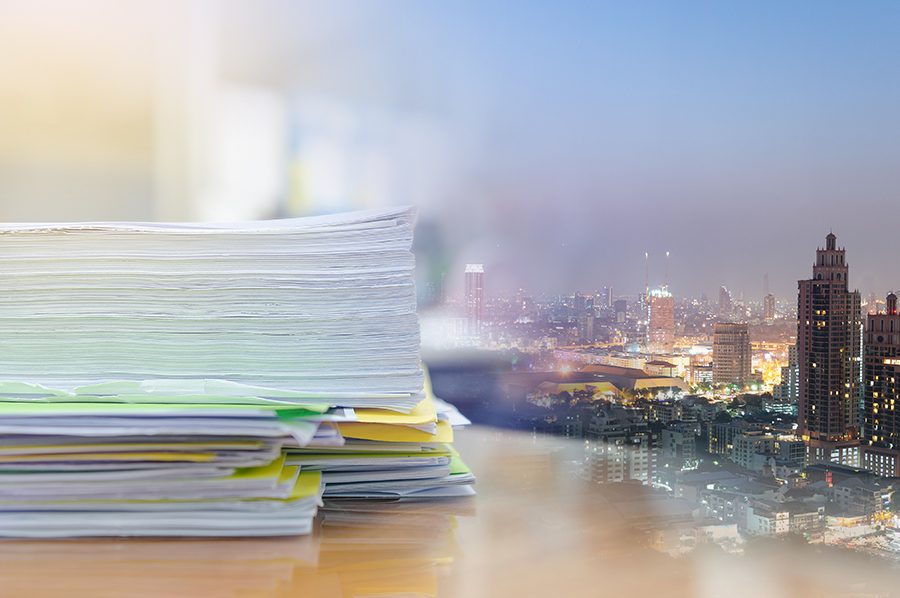 What is a Gross Lease in Commercial Real Estate?

When you're entering the negotiation phase for a commercial lease, you'll have to quickly learn a lot of new vocabulary to understand the contract. While the jargon behind a commercial real estate lease for any type of commercial property can be complex, knowing what these phrases mean can provide invaluable insights into the nature of the lease. It can also help you avoid disadvantageous lease terms.

One of the most important things to know about any lease is what that lease’s type is. Take, for example, gross leases. What is a gross lease in commercial real estate? Why should you consider one? And, what do you need to know about these leases before entering into one?

Read on to learn about the “ins and outs” of the gross commercial lease.

What Is a Gross Lease?

With a gross commercial lease, tenants make a single payment to their landlord. Rent is paid to both occupy the space and cover some other property expenses associated with the unit. This type of commercial lease is most common in office buildings and retail complexes with multiple tenants.

In a full service gross lease (which is what people typically mean when they say "gross lease"), pretty much every expense is included. Other types of gross leases, though, could leave you with almost the same liability as you would have under the triple-net lease (in which you promise to pay all the expenses of the property). With that in mind, it's very important to read the lease carefully. For the purpose of this piece, though, we will assume that you are considering a full service gross lease moving forward.

7 Things You Need to Know about Gross Commercial Leases

1. What Your Expenses Are under a Gross Lease Can Vary

A gross commercial lease includes base rent plus expenses, but just what those expenses are can vary from contract to contract. Maintenance, taxes, utilities and insurance may all be included. Before you sign a gross commercial lease, you'll need to carefully review which expenses are included and which are not. Otherwise, you may face the same level of liability for property expenses that you would have under a triple-net lease.

Some companies prefer gross leases because they simplify accounting, making it possible to pay for all of the costs associated with occupying a space with a single check. This can be especially beneficial for large companies that have sizable commercial lease portfolios.

3. Rent Rates May Vary from Month to Month

Although not common, some gross commercial leases provide the landlord with the right to alter rents from month to month to cover certain variable costs, usually utilities. With this type of lease, your rent could be higher during the summer months when you use more air conditioning. This type of clause reduces the benefits of having a gross commercial lease, so it's wise to try and negotiate its removal before you sign.

4. Your Rent Could Increase over the Life of Your Lease

More commonly, gross commercial leases allow landlords to make rent escalations at specific intervals to cover increasing costs. In some cases, the increases are tied to actual costs and will only increase when expenses have gone up. The escalation may also occur regularly by a fixed amount or follow the movements of a third-party indicator like the Consumer Price Index.

5. Occupancy Costs Are out of Your Control

One downside of gross commercial leases is that occupancy costs are generally out of your control once you sign. For example, if you are paying a flat rate for utilities, installing LED light fixtures or a smart thermostat to save energy will not decrease the cost of your rent unless you renegotiate with your landlord.

6. Gross Leases Help You Plan for the Future

A positive aspect of gross leases is that they can make budgeting and forecasting simpler. You'll be paying a fixed rental rate over time and can easily factor in the costs.

7. Gross Leases Require You to Only Pay for Your Space

Another thing that tenants often like about gross leases is that they are only responsible for paying for utilities, maintenance and other costs associated with the space that they are occupying. Costs for the rest of the building are covered by the landlord.

Why You Should Consider a Gross Lease

In an age where landlords have moved to transferring the expenses of running the building to tenants through triple-net lease structures, the gross lease might seem hard to find. However, some landlords are realizing that gross leases are desirable to their customers — i.e. tenants — while others have never moved away from it. While a gross lease structure might seem more expensive up front, there are actually compelling reasons to choose one if you have the opportunity.

Because It's Transparent and (Somewhat) Predictable

One of the best parts of leasing space on a full service basis is that you know what you're going to spend. Your rent is your rent. And, barring any expense stops or base year provisions, you know how it will change over time. If utility costs go up, building repairs spike or property taxes get reassessed, all of those potentially expensive issues are the landlord's problem instead of yours. Combining a gross lease with pre-defined increases lets you get long-term visibility into your occupancy costs, as well.

Because It Can Be a Better Deal

Sometimes, a gross lease is a better deal. One of the marketing challenges of a gross lease is that it looks more expensive than a net one. After all, you'd rather pay $21 per square foot in rent than $33, right? However, if the $33 lease is a gross one and the $21 is a triple net lease in a building with $13 in CAMs and other expenses, the gross lease is actually less expensive. It isn't uncommon to find that this is the case, by the way.

In addition, the gross lease is frequently (but not always) offered by less-sophisticated landlords. While working with a mom and pop owner can have its own challenges, it could also mean that they are pricing their building below market. Your tenant representative can help you identify these types of situations if you are lucky enough to come across them.

Because It’s the Only Option

The best reason to choose a gross lease structure, though, might be that you have no choice. If you find a space that suits your needs in a building that works for your business at a total cost that fits your budget, is the lease structure really that important?  Ultimately, if the landlord insists on a gross lease structure, acquiescing to that request could help you to negotiate a better deal on other business points. it might also be the only way that you can get that perfect space.

What is a Modified Gross Lease?

There is more than one type of gross lease. A full service gross lease, as outlined above, can be beneficial, and there are many reasons to get one. However, there are also modified gross leases (MGLs) to consider.

The commercial real estate industry typically splits the costs involved in running a building into three broad camps — taxes, insurance and operating expenses. That last category is a very broad one that includes utilities that are billed to the building as a whole, repairs and maintenance, management, contract services, and just about anything else that the landlord spends on the property.

According to BOMA (the Building Owners and Managers Association) a modified gross lease is one where the landlord and tenant divide up those expenses. For instance, you might pay for operating expenses while the landlord pays for taxes and insurance. Sometimes, this lease is also referred to as a single net lease (as opposed to a triple net lease where you pay for all three).

While BOMA's definition is relatively straightforward and clear, the actual usage of the term in the industry can be confusing. You might run into a landlord who quotes you a full service rent with expense stops and calls it a modified gross lease.

In this structure, you pay a single flat rent, but if the building's expenses (operating or otherwise — so you have to read the fine print) exceed a certain amount per square foot, you would pay the difference. Or your landlord might simply calculate your modified gross lease differently than other landlords.

In the same vein, one building might quote its modified gross lease with every expense included. Another one down the street could have a lower modified gross rent, but add on additional charges or expenses. Yet another building could have low rent and low reimbursements because it is configured in a way that many utilities and other expenses get billed directly to you by the service provider.

Considering how confusing MGLs can be, it’s important to know a few key things about such leases before you enter one. Here are seven key things to know about modified gross leases:

1. It's the In-Between Lease

3. The Rent SEEMS Cheaper Than a Full Service Lease

With triple net leases, you should know to always check on the CAM charges. Modified gross rents, on the other hand, are usually much closer to full-service gross rents. This means that it's important to find out what your expense liabilities will be to avoid an expensive surprise. A tenant representative knows to check this for you.

In full-service gross space, you usually have your electricity included in your rent. In triple net space, not only do you not have it included in the rent, but it is also likely that you will have your own meter and have to pay that bill directly. It's not uncommon for you to pay your own gas and water bills, too. With a modified gross lease, it's hard to predict what will happen, so keep your eyes open and talk to your landlord.

6. You HAVE to Read the Fine Print

Modified gross leases are unpredictable. When you hear that a space is modified gross, you can't be sure of anything, other than that you'll have to pay for at least some of the building's costs along with your rent. The only way to understand what your space will really cost is to carefully review the lease documents and to have a good understanding of the physical configuration of the space and of its condition, utilities, and other features.

7. You Should Get Some Help

Given all of the complexities of a modified gross lease, the best way to handle one is to have a qualified tenant representative working with you throughout the process of finding the space and negotiating the lease. It's always a good idea to have a tenant rep, but because truly understanding the implications of a given lease can require a great deal of knowledge, working with a specialized commercial real estate broker can save you money, time, and frustration.

Have Questions about Gross Leases for Commercial Real Estate?

If you have any questions about gross commercial leases or MGLs, reach out to the iOptimize Realty team today! We’re here to answer your questions and help you get the best deal on your commercial real estate.

Meta: What is a gross lease for commercial real estate? Why should you consider one? Get the answers from the iOptimize team!

Here are a few other articles we think you'll enjoy:

How Much Does a Tenant Rep Cost?

9 Reasons You Need a Tenant Rep Broker on Your Side